It was so much louder than Eustace had imagined.  But then again he had only heard it from a distance.  The murmur of possibility ringing in his ears amid the din of the hens cackling.

He hadn’t really planned it.

Lately it all had just seemed too much.  Maybe it was his age.  At ten, he was no spring chicken.

And he had been under so much pressure at work.

Any perks to being the alpha male had long since lost their luster.

The younger roosters spent all their time plotting against him; the hens were always making jokes about his stamina; and there were rumors around the barnyard that the farmer’s son, who had taken over the farm unenthusiastically when his father died, was selling out to a poultry conglomerate so he could go back to his job on Wall Street.

Life was a bitch sometimes.

And even Bertha, his favorite speckled red hen, had become something of a nag lately – always wanting him to spend more time with her and then doing nothing but complaining about the roost when he would come over.

As if he had time for home improvements – what with eight other hens to service and the constant threats to his authority.

Plus, let’s face it.  No one needed him to crow at the crack of dawn anymore.

The farmer’s son wasn’t exactly fond of early rising, and besides, a rooster simply couldn’t compete with the iPhone for accuracy.  And while he was loathe to admit it, Eustace always did start bobbing his head as the first five bars of Usher’s Yeah would drift out the farmhouse window every nine minutes from eight o’clock to about quarter to ten each morning.

So a change of scenery was starting to become more appealing by the day.

And walking away had been easier than he imagined.

Since the farm had passed from father to son necessary maintenance had been neglected.  Eustace had gotten into the habit of pushing his way through the dilapidated chicken wire enclosing the barnyard and strolling out into the cornfields at night, enjoying the quiet uninterrupted.  In the middle of the cornfield he stared up into the night sky and dreamt of his youth – heady days spent roosting in the low branches of the oak trees that surrounded the property.

Perched in those branches he and his friends had felt untouchable; scoffing at both the chicken hawks that swooped down to pluck away downy spring chicks like berries from a bush, and the farmer’s hatchet that swung in the hen house like a macabre pendulum every fall.

From those same branches he had seen the expressway cleave its way through the farmer’s fields. Watched the cars flying by.   Imagined exciting and unknown destinations that lay beyond the grey ribbon of road dissecting the corn rows.

But he had stayed the course.  And stayed on the farm.

The hormones in the chicken feed slowly made him more capon than cock. No longer lean and fierce and able to take flight after a few quick steps, he stopped roosting in the trees. His dreams of adventure faded.

The stroll became a hike that became an expedition, pushing Eustace nearly beyond the limits of his overweight and unbalanced frame.

In his efforts, he had barely noticed the sky changing from black-blue to grey-gold.  Or the frost clinging to his comb and wattle.  Or the soft dirt of the fields giving way to the hard gravel that marked the shoulder of the expressway.

His white feathers ruffled from the rush of air as each car sped by.  His body quivered from the growl of diesel engines and the throbbing hum of rubber rolling over asphalt.

The murmur of possibility had become a deafening roar.

Eustace blinked and shook his head.

His life flashed before his eyes and suddenly Eustace knew with a certainty that he had never felt before that he was not special.  The bravado of his youth had been blind ignorance not courage.  His avoidance of both the hawk and the hatchet nothing but dumb luck.

So if not now, then when?

Or better yet, then what?  Go back to the farm?

Back to where it began so he could face the inevitable end?  Not today.

Eustace drew himself up tall.  He puffed out his chest and stood erect.

Then he craned his neck and crowed as he stepped over the white line. 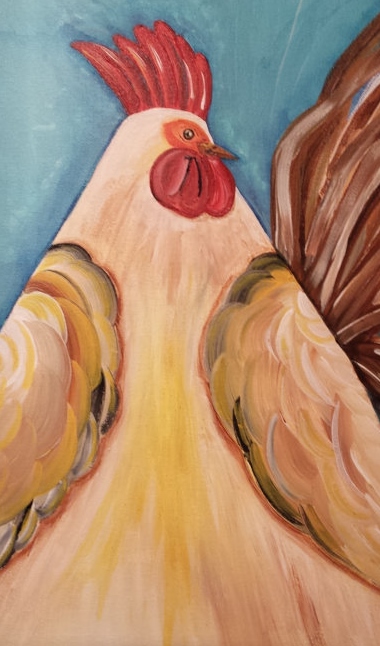